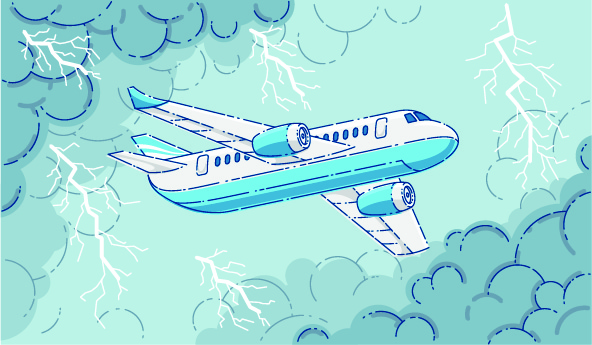 And, yes, a plane can be struck by lightning!

With thousands of aircraft traveling over the United States alone at any given time, it would figure that they get struck by lightning wouldn’t it? Well, they can and they do all the time. In fact, the average plane is struck by lightning about once a year! That’s over 7,000 strikes annually! When you consider how often planes must pass through the takeoff and landing altitude where lightning activity is most prevalent, it makes sense.
Since airplanes are struck by lightning so often, you might wonder why we never hear about plane crashes due to lightning? The last plane crash recorded due to lightning strike it was in 1963. Now due careful engineering, a lightning strike’s energy is safely redirected over the outside skin of the plane before exiting safely.

How are planes protected from lightning?

Lightning typically enters the nose of the airplane and exits the tail, so let’s start at the nose.

The nose, or radome, houses the plane’s radar. It cannot be covered entirely with aluminum because metal would interfere with the electronics. Instead, thin metallic strips called lightning diverters are incorporated on the radome’s surface. The lightning diverters are connected to a conductive mesh of aluminum or copper that is built into the plane’s body. The conductive materials will cause a lightning strike to be directed over the outside of the plane without damaging its sensitive electronic equipment or passengers. However, the lightning energy still needs exit points.

Have you ever noticed the little posts lining the backside of the airplanes wings and other trailing edges? Those are called static dissipaters or static wicks.

As a plane flies, it creates friction with the atmosphere and a static charge builds up on the plane’s body. This charge needs to safely leave the plane evenly because large uneven discharges would interfere with aircraft communications or cause a fire. Static wicks or dissipaters contain sharper points than other likely exit places such as the sharp edges of tail fins and wings tips. Thus, the charge will discharge back into the atmosphere gradually and through these wicks instead. In addition to safely discharging static, they also direct the charge from lightning strikes away from the plane back into the atmosphere. All these conductive metals are directing the flow if electricity to an exit point, but they all must be properly bonded for the system to work.

Science, technology, and engineering has improved today’s aircraft to the point where major damage is improbably if a plane is struck by lightning. More concerning to aircraft safety is the turbulence and wind shear generated by thunderstorms. Don’t be alarmed if you are on a plane and it does get struck by lightning. It will no doubt need to make a landing as soon as possible for a safety check, but that is a flight delay I am A-Okay with!